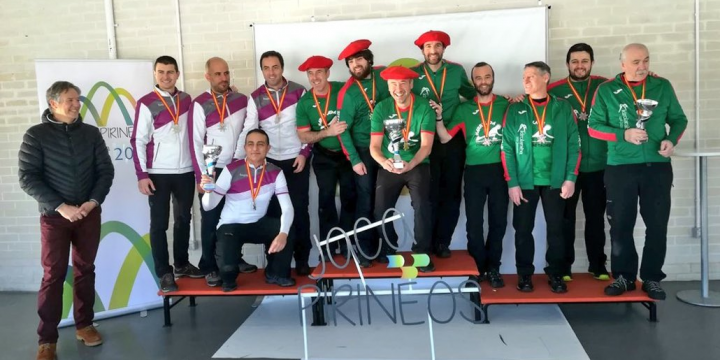 Harrikada teams reach the promotion, podium and a great performance

Spanish National Male 2nd Division Championship closes with Harrikada Oreka IT as champions, Harrikada Fundación Vital bronze medal and Harrikada Curlstore on 6th position, and one place on the 1st league next season. These good results show a growing line for a club that bets on the future including players of its Curling school in a sport that looks to make a way.

Every competition needs a good staging, frenetic game rhythm and sport level to make the participants give their best. Under these premises, three Harrikada teams went to Jaca ice rink on 1-3 February.

Competition had a round robin with 6 teams playing in 3 sheets for the occasion. The first games confronted Harrikada teams and, after that, it was the time for the other teams of this season´s 2nd division: Puigcerdà Pànxing, Hielo Pisuerga and Los Compadres from Málaga.

Harrikada Curlstore (Balta Moreno, Josu López, Iñigo Ruiz Alvarado, Javi Carasa and Josu Perlacia) started against Puigcerdà Pànxing, where three of their components make their debut in an official championship with Harrikada. They couldn´t win but their game attitude was gaining end by end. They had chances until the last stones with oppponents aspiring to the higher positions of the ranking. In this way, they played a second game vs Harrikada Fundación Vital, a tight scoreborad until the end, where only the last end decided the victory.

The fourth game was commendable vs Hielo Pisuerga. Harrikada Curlstore was winning until the halftime, and specially against Los Compadres, where it was neccessary to measure the last stone. Finally it was for malagan side. This could have ended with and extra end in a game that could have changed the qualification for Play-off.

The improvement leaves a good impression in a new construction team that the first stone has illusion stamp on it.

On the other hand, Harrikada Fundación Vital (Javier Goldarazena, Máximo Calvo, Rubén Martínez and Féliz Díaz de Lezana) was also building a path well pavement, after a first defeat against Harrikada OrekaIT. The victory against Harrikada Curlstore opened up the chance for qualification if they got another victory. In this case, they beated Puicerdà Pànxing.

On its trayectory, they were very close to defeat Los Compadres in a game that the last ends were a hard fight for every single stone in a very close scoreboard.

The qualification was done before the last round of round robin. This gave them the option to compete on Sunday for a promotion place. They would have to play page again vs Los Compadres. The game started with the malagan taking advantage in the scoreboard, but Harrikdada Fundación Vital, after the break, turn it. The last take out shot from vitorian skip gave the pass for the promotion battle and podium was guaranteed.

Harrikada Oreka IT (Iraitz Goldarazena, Iosu Gabilondo, Egoitz Gordo, Iñigo Ruiz de Eguílaz and José Miguel Vallés) started with a first win to Harrikada Fundación Vital, after that, a new game againts Hielo Pisuerga, where compass measure gave the victory to Hielo Pisuerga after a difficult take-out that put out 4 stones out out score area.

From that point, it was only possible to win to get the chance to be in the final match. Harrikada Curlstore was the next team to beat, then, Los Compadres and, finally Puigcerdà Pànxing that were almost to end their participation with a win as they had Harrikada Oreka IT worried of their last shot.

Already qualified in second place due to a triple tie in victories (4-1) and the second best LDS, they were direct to the final game against Hielo Pisuerga, team that beat then in round robin. Sunday morning was totally different from Friday afternoon, Harrikada Oreka IT took advantage on the scoreboard and managed it well. Opponent´s stones didn´t find the way to hurt Harrikada´s house.

The victory was two ends before the game was finished as Hielo Pisuerga considered to hand over the game. So Harrikada Oreka IT got gold and a place at first league next season.

There was only one more place for first league. The game between Hielo Pisuerga and Harrikada Fundación Vital, was repeated after two years in the same division. Hielo Pisuerga got quickly advantage and Harrikada Fundación Vital went up till the break. The sixth end had lots of opponents stones and not a gap for Harrikada skip that finally couldn´t go in. This left the game with no options to turn it down.