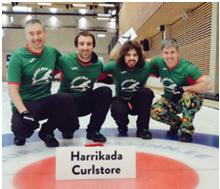 This time, Tallinn was the place for the new adventure for Harrikada Curlstore boys, Tondiraba Jäähall the ice rink and, unknown opponents until now, coming from Norway, Russia, Latvia, Czech Republic, Finland and Belarus.

The first game against Saint Petersbourg Female Junior Team finished with 5 tie after 7 ends where Russian players could mark 2 in the last end to finish the game.

The second match was versus norwegian Kingkosters International 2, where Harrikada Curlstore controlled all the game despite of rival´s effort to cut off the distance. The game finished  4-7 after 7 ends.

On Saturday, already playing in the intermediate group, Harrikada played against the eight qualified Bullseye (EST). The game started losing hammer in the first end but getting important advantages on the next 3 ends. With 2 for locals on the 5th end, Harrikada Curlstore decided to clean the house with hammer on the 6th end and close with victory on the 7th in a game where Vitoria-Gasteiz people felt better than the rival.

Already on Sunday, the game versus Ledo3alfa (CZE) was going to test Harrikada Curlstore. Throw accuracy was at a high level from the very beginning. Some fails on our boys´ throws let Czech team turn the score but nothing was unachievable, after 2 ends and 4 stones Harrikada took back initiative till the end with 1 stone up and hammer. On the 7th end, a face to face end, the last throw of Czech skip throwed away Harrikada´s wish for the tittle that couldn´t make a final draw in a complicated house full of guards.

Harrikada Curlstore finished qualified on the top 6 that allowed to fight for a podium position, as it was an open final due to Schenkel system, but there was no place for a final game against Estonian Larry Hill Team (EST).

The final balance, without any doubt, is very positive under a sports point of view on the way of masculine team training for Spanish national Champioship that will be hold in Jaca from 23rd February until 11th March.

Our thanks are for Club Culing Tallinn for the warm welcoming and Aktion Aventura for the logistic. Jeti Cup is already a calendar reference for Harrikada.