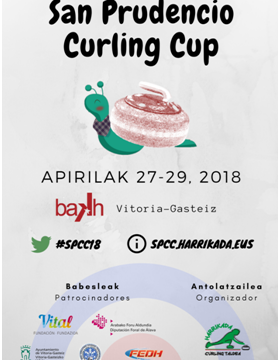 Province´s annual date with Curling will be next weekend with San Prudencio Curling Cup 2018, a new edition with more teams and lots of novelties. An event created for local players and fans that will bring together the most selected of national and international scene, in the best atmosphere.

One year ago we finished SPCC17 making the start of a new and more ambitious edition. Harrikada has started up a competition that combines sport with local festivities in Álava, adding a very attractive sport event to this special weekend´s offer.

There will be 24 teams, with Harrikada players from Álava and Bizkaia and Iceberg, Txuri Berri from San Sebastián, Puigcerdà, Barcelona, Val d’Arán and Sporting l’Olla from Catalonia, Hielo Pisuerga from Valladolid, Madrid B-52, Jaca from Aragon, United States Saint Paul (MIN), Rillanders from Finland, German and Monaco players that will be integrated in Harrikada teams.

This year, we will have more players from Harrikada Curling School. There will be 3 teams that will test a high quality ice prepared exclusively by the ice technic Alfonso Vilar who recently was at Pyeongchang Olympic Winter Games. The will have a high level as 2017 new curlers played the final game. For this challenge, they will have the experienced German player Peter Gaedeke, very well-known in this bonspiel.

There are several novelties that will make this edition special, with a new staging transforming the Bakh ice rink into a stage for the highest level tournaments. For the first time, the final game will be broadcasted in streaming by Baicast, offering it through the digital channels of EITB (Basque television), Spanish Federation and Harrikada websites and specific Curling channel, Hammer Spain, which will be part of commentators set. But this will be on Sunday.  Until then, 4 rounds will confront the teams divided in 3 groups, in a classic Schenkel system where the teams play against others with the same level according to their results.  In addition to this, we will follow the rules that World Curling Federation have ready for the next season.

In the social program of the bonspiel, there will be the awards ceremony of Hammer Spain, awards that the specialized blog gives to the most highlighted players of previous season, by   popular election.

This is a very attractive tournament, open to everybody that wants to join us and come to Bakh ice rink from Friday 15:00, all the weekend. The entrance is free and there will be a great atmosphere.

The event will be completed with cultural acts for San Prudencio patron saint along all the territory and a Rioja Alavesa wine cellar visit for the most traveller visitors in a new edition that already sounds around the world.

So let the competition starts on and enjoy the best sport atmosphere at #SPCC18.