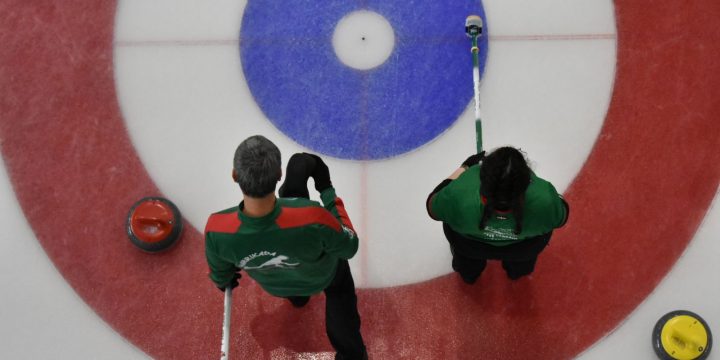 Harrikada Vitrogres has qualified to play the play-off at Spanish Mixed Curling Championship and, at the end, the 6th place in the final rankin. This will be the last edition in open format, next season will change to divisions with 10 teams.

Harrikada got 3 teams participating at Spanish Mixed Curling Championship during 13-15 April in Jaca. This year there were 14 teams divided in 3 groups. The best six fight for the title of this category where 2 men and 2 women alternate in equal conditions in all game roles.

Harrikada Larain (Oihane Ruiz, Josemi Vallés, Toñi Rodriguez and Rubén Martínez del Pino) was in the red group with Jaca, Txuri Berri Cafés Aitona, Barcelona Obradó and Hielo Pisuerga, in a competition where they couldn´t finish up in the scoreboard but showing a good level in the matches.

Worse luck had Harrikada Arroyabe, they couldn´t have Josune Albisu for injury. In this modality is not possible to substitute players and the team defended Harrikada colours in the ice with Javier Goldarazena, Ainhoa Goldarazena and Iosu Gabilondo. So, in the green group, they couldn´t overpass the opponents Val d’Arán, Sporting l’Olla, Barcelona Shaw and Txuri Berri Gorena, in an exhausting qualification round.

On the other hand, Harrikada Vitrogres (Iraitz Goldarazena, Lydia Vallés, Iñigo Ruiz de Eguílaz and Belén Bárcena) started better its participation on the blue group beating Puigcerdà Panxing and B-52, and keeping and intense city derby that this time was for SVC Iparpolo in the last stone. As second qualified of its group, the team went to the Play-off for the title. Quarter final game was against Val d’Arán in another tight match where Harrikada last stone could not get the objective to keep Harrikada Vitrogres in the competition.

Sixth place that allows Harrikada to be next year in the first division of 10 teams. The actual format means very tight schedules and games in a 3 sheets ice-rink.

Harrikada wants to congratulate Txuri Berri for the title and all the teams for the competition level in a modality that is improving at a higher level.