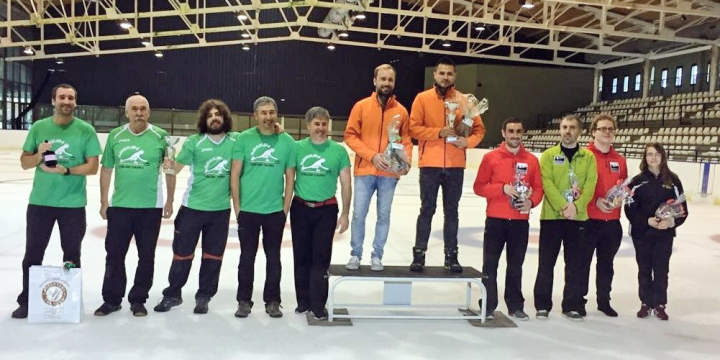 Harrikada Vitrogres team gets the second position in the final classification of Vielha Bonspiel,
at its first edition organized by Val d´Aran Club. Sporting Club l´Olla won the title.

Iñigo Ruiz de Eguílaz, Egoitz Gordo, Javier Pérez de Goldaracena, Iosu Gabilondo and Iraitz Pérez
de Goldaracena got three victories and one defeat on their way to the final, where they
couldn´t beat Catalans from Sporting Club l´Olla-L´Aliança. The marker 11-1 reflects a fateful
game against a rival Harrikada had already defeated on the classification phase.
The competition started on Saturday 30 th September, it hosted 8 teams; in addition to the
aforementioned ones, other participants were No Name B-52 (Madrid), Hielo Pisuerga
(Valladolid), Barcelona Black and Barcelona Red, the hosting club, Val d´Aran and a
combination of players from different clubs integrated in the Full House team, where
Harrikada player, Oihane Ruiz, took part.
On Sunday 1 st October, the last round took place just before the final games, with Harrikada Vitrores qualified leader.
The effort by the organizing club made it possible that this first edition might continue in a
next edition for which Harrikada is already waiting for the invitation.