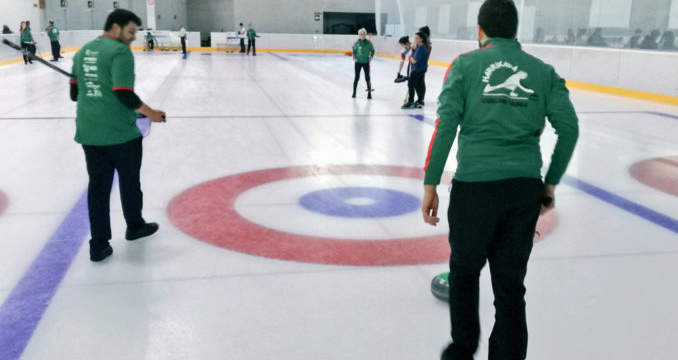 Harrikada has successfully participated in the I Rookies Bonspiel. Its teams, Construcciones Arroyabe and Traducción e Interpretación T&I, showed a good participation during the first bonspiel organized exclusively for players with less than 3 years of experience, the Rookies Bonspiel, organized by RFEDH, at Jaca ice rink on 14-15 October.

The teams were formed by Máximo Calvo, Maria José Audicana, Iñaki Garaigordobil and Rita Marable, for Harrikada T&I, and Belén Bárcena, Josu Perlacia, Rubén Martínez del Pino and Lydia Garaigordobil, for Harrikada Arroyabe.
The competition had 4 teams: Harrikada Arroyabe, Harrikada T&I, Jaca and a mixed team of players from Hielo Pisuerga/Barcelona. The competition system started with a classification round of just one group (robin round); then, the first two teams in the ranking played the final game and the third and fourth fought for the bronze.
The first round already confronted the 2 Harrikada teams, where, with some alternations in the score, we saw the victory of Arroyabe in the last end, where the two teams arrived tied. The final score was 8-4. In the next rounds, the scores where really exciting until the last stones, although neither T&I nor Arroyabe were able to beat their rivals.
Therefore, the fight for bronze was disputed in the last match, which T&I won this time, in a very tight score of 6-5. The last stone decided the winner, with a take-out by T&I, which found the appropriate gap between Arroyabe’s guards.
In the final game, Jaca beated the mixed team of Hielo Pisuerga/Barcelona in a very exciting game, where the first scored 10-8 and where the last stones had to be measured, because there were some chances to play an extra end. Equality was absolutely present in these two teams, which had tied in the qualifying stage.
So, congratulations to Jaca and to all the participants in this Bonspiel, where the Harrikada Club made a strong bet for its rookies to have the chance to challenge other mates with a similar experience and give, therefore, the teams a boost to try to expand the basis of this sport.
There will be another appointment this season, this time in Puigcerdà, next 21 and 22 April, where the rookies will have the chance to compete on dedicated ice.