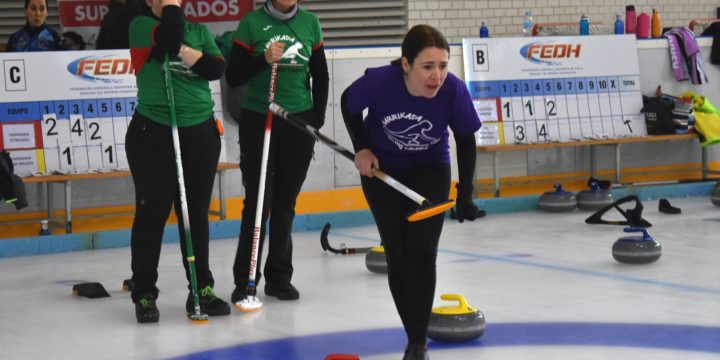 Spanish Women´s Curling Championship ended the round robin and, with that, Harrikada Vitrogres and Harrikada Bar Hirusta teams at fifth and seventh position.

The first competition weekend of Spanish Women´s Curling Championship has finished with the qualification of the first 4 teams of round robin phase. This time none Harrikada teams are in.

Harrikada Vitrogres (Lydia Vallés, Josune Albisu, Nagore Goldarazena, Toñi Rodríguez and Lydia Garaigordobil) opened its participation winning Harrikada Bar Hirusta, but then they got three consecutive defeats. Even though, they forced the extra end against Val d’Arán. Victory versus Puigcerdà Pànxing let them play off options in their last game against Barcelona Almanzor, but finally the win went for catalonian team.

On the other hand, Bar Hirusta (Oihane Ruiz, Nagore Ramírez de la Piscina, Belén Bárcena and Leire Carasa) failed several matches and did not find their best game, until the final stages versus Puigcerdà Pànxing, where the scoreboard was very adjusted and, once again, against Val d´rán, in a very equal match that finally game the game to pyrenians.

Harrikada closes here the participation willing to have gone a little bit further but with the feeling of have added new values to the competition that will come back with more experience and vision in a club that is the one and only that contributes with more players to this sport at a national level.