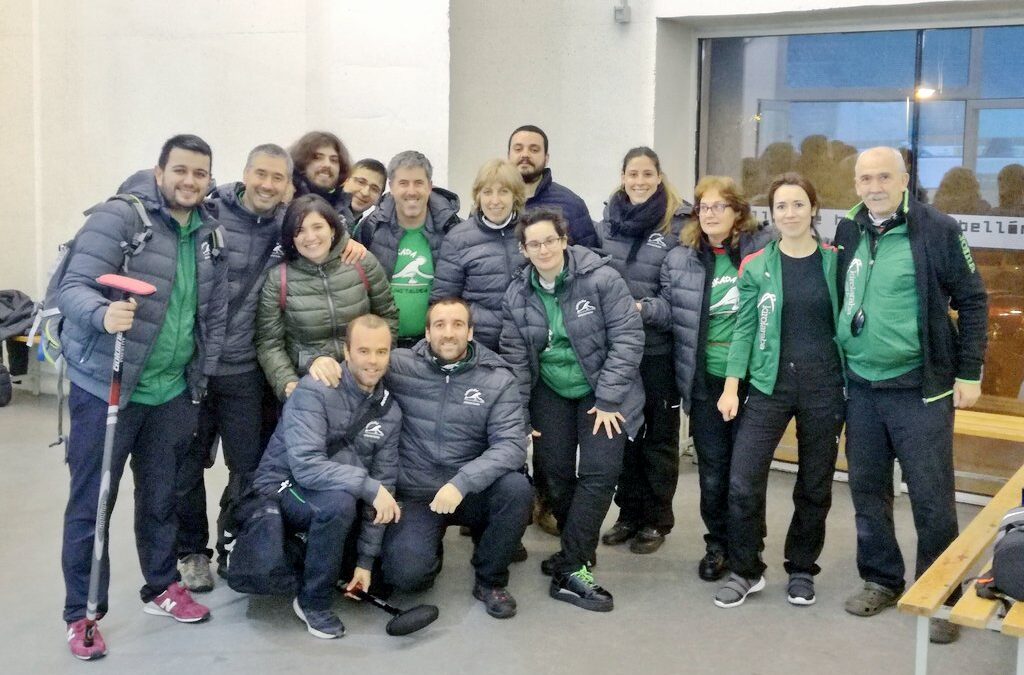 Harrikada Larrain, (Lydia Valles, Nagore Pérez de Goldaracena, Josune Albisu, Toñi Rodriguez and Oihane Ruiz) started with a stunning beginning instilling their opponents (SVC Iparpolo Siblings, Harrikada Aktion, Harrikada Oreka), which gave them the leadership of the competition. They couldn´t endure the rhythm of victories, as right after that they got 3 defeats (Madrid B-52, Txuri-Berri Cafés Aitona and Hielo Pisuerga Joven), leaving all the options for the second phase. They couldn´t sum up the victory either versus Jaca in a very tight match, or versus a very accurate Txuri-Berri Mixed. They could only get a draw versus SCV Iparpolo Vamms. The fourth victory came against Madrid No Name and the fifth versus Hielo Pisuerga Crianza, obtaining 11 points and 7th position in the final ranking.

On the other hand, the Harrikada Aktion team (Josefo Pérez de Goldaracena, José Miguel Valles, Máximo Calvo, Rubén Martínez del Pino and Belén Bárcena), formed mainly by rookie players coming from Harrikada Curling School, completed a participation going from less to more in a competition where they started being defeated by Txuri-Berri Cafés Aitona; Harrikada Larrain, Harrikada Oreka. Their first point came versus Hielo Pisuerga Joven, they were very close to be a surprise against Jaca, the competition´s leader. Results were more and more adjusted every time, making their rivals very difficult to sum stones against a team that was gaining more experience. Already on the second phase, defeats versus SVC Iparpolo Siblings, Hielo Pisuerga Crianza, Txuri-Berri Mixed, SVC Iparpolo Vamms seemed to undermine the team´s moral, but, far away of that, they saved the best for the last, and against very productive Madrid teams, they summed up a tie versus No Name and, being a surprise to B-52, with clear podium options, they recovered spectacularly the game. With 4 points, Harrikada Aktion avoided closing the classification and they got the 11th position of the final ranking.

Finally, Harrikada Oreka (Iraitz Pérez de Goldaracena, Iosu Gabilondo, Egoitz Gordo and Iñigo Ruiz de Eguílaz) made a first phase with highs and lows, starting with two promising victories against Jaca and Harrikada Aktion, but after that, being were defeated by Harrikada Larrain. On their game versus Hielo Pisuerga Crianza, they summed up another victory that they didn´t find again against Madrid B-52 and Txuri-Berri Mixed in a weekend that did not leave the players in a good mood. On the second phase, Harrikada Oreka showed a more competitive level to complete their podium options and they were accumulating positive results against SVC Iparpolo Vamms and Madrid No Name. It was versus SVC Iparpolo Siblings in a cities derby, which they tied, where they kept their podium options, before summing up a new victory against Hielo Pisuerga Joven. On the last match, versus Txuri-Berri Cafés Aitona, the Donostian team showed a very high competitive level in a game with a final defeat that left Harrikada team far from podium, but not from the qualification for the next edition of Copa España, where Harrikada will defend last year´s title.

From Harrikada Curling we want to congratulate the champions and all the participants, specially those qualified for next edition of Liga España (1º-Txuri-Berri Mixed, 2º-Jaca and 3º-SVC Iparpolo Siblings) and Copa España (4º-Madrid B -52, 5º-Txuri-Berri Cafés Aitona and 6º- Harrikada Oreka). These next competitions are due in April 2018 and will include the qualified teams from the Liga Catalana competition, which is being disputed in Vielha and Puigcerdá ice rinks.